Dissent in Morocco: From Abraham Serfaty to Nasser Zefzafi

*This article appeared preciously on al-Jazeera, but I am reposting it in light of the news that a Moroccan court upheld the long jail terms for some of the Hirak protesters. 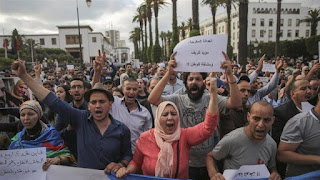 Today marks the eighth anniversary of the death of Abraham Serfaty, a prominent Jewish Moroccan political activist. Serfaty was an avowed communist and anti-colonial nationalist who opposed the French protectorate in Morocco. As a leading Marxist-Leninist activist, he was first arrested and exiled by French colonial authorities in the early 1950s, then imprisoned for 17 years and stripped of his citizenship by the Moroccan monarchy in the following decades.

In 2000, he was rehabilitated after the death of King Hassan II, allowed to return to Morocco and even handed a royal advisory position by King Mohammed VI. Serfaty passed away just months before the wave of Arab uprisings hit Morocco in February 2011. His passing in November 2010 - just a month before Tunisian street vendor Mohamed Bouazizi set himself on fire sparking the Arab uprisings - symbolically marked the advent of a new generation of protest movements in Morocco.

Unlike the formally organised and ideologically motivated opposition forces that Serfaty led in the 1970s, the current forms and methods of activism in Morocco are leaderless, non-ideological, and often triggered by accidental events emblematic of the everyday socioeconomic struggles of the general population.

Although the expression of dissent has changed over the past decades, the reaction of Moroccan authorities to it has not. The use of institutional manipulation to stifle the persistent protests of the past eight years is not so dissimilar to tools the authorities employed back in the 1970s against the leftist opposition - a reality Serfaty would have surely lamented and criticised had he lived long enough to witness it.

The 'Makhzen' and decentralisation of social protests
In the wake of the Arab uprisings, the Moroccan monarchy was seemingly enjoying an elevated status within the political sphere which put it above political reproach. This special status had been guaranteed by the provisions of the Moroccan constitution and solidified by the historical authority of the so-called "Makhzen" - the monarchical regime and deep-state elite networks.

The Makhzen allowed the monarchy to effectively control the political process in Morocco while appearing to be above the political fray (and hence carrying no direct responsibility for immediate crises). To maintain this dynamic, the monarchy increasingly resorted to the ritualisation of the political process in Morocco, employing ceremonies, spectacles and public performances that consecrated the king's status as the arbiter and guarantor of order and stability. Through the usage of culturally and historically resonant symbols, the regime ritualised public discourse, which allowed it to extend and reproduce legitimacy.

But the popular protests that erupted in February 2011 challenged this legitimacy. As a result, the monarchy had to adjust to the pressures of the new forms of activism which the "Moroccan spring" ushered in by reviving old dissent-stifling tactics like reshuffling cabinets and holding electorally-engineered legislative elections.

Historically, the Makhzen has resorted to recycling political parties and coalitions to maintain the facade of competitive political participation. It used this same method in 2012 to respond to the popular protests; a sham opposition was given the reins of power - in this case, the Islamist Party of Justice - to serve as a counter-weight to popular dissent.

The Arab uprisings also led to the decentralisation of social protests, which moved away from urban centres to Morocco's peripheral regions which share common political and economic grievances. The rise of spontaneous organic forms of political and social activism is a hallmark of this new activism scene in Morocco.

These "non-movements" of peripheral protests in various regions of Morocco are rarely guided by an ideology or led by an organised leadership or structure. Even the emergence of Nasser Zefzafi as a prominent activist in the Rif (the northern mountainous region of Morocco) is almost as accidental as the events leading to the year-long al-Hirak al-Shaabi (Popular Movement) protests.

The wave of demonstrations started as a result of public outrage at the incidental death of Mouhcine Fikri, a 31-year-old fisherman crushed in a garbage truck as he protested against the seizure of his fish by the police in 2016. Zefzafi's interruption of the Friday prayer sermon in a mosque in the city of al-Hoceima in 2017 was a spontaneous, not calculated, expression of anger and desperation against a hegemonic cultural and political discourse of domination.  Therein lies the novelty of current social activism in Morocco: protests emanate from shared experiences of large numbers of ordinary people carrying common socioeconomic grievances.

'Hogra': Resisting extreme injustice
The collective anger at the deteriorating socioeconomic conditions and standard of living in Morocco over the past few years has been captured by the Moroccan dialect word "hogra", roughly meaning extreme injustice.

Hogra is perceived by many as a defining feature of the Makhzen's entrenched authoritarian edifice - a cultural and political system of humiliation and scorn, which is perceived to be institutionalised and practiced by state bureaucracies towards the poor, the youth and the disenfranchised. Hogra also refers to state abuse of power and corruption by the elite.

The growing wealth gap in Morocco provides the starkest reminder of hogra: Moroccans see the luxury cars, opulent palaces, and other ostentatious accessories of wealth while at the same time experiencing systematic subjugation and impoverishment in their everyday life. Over the past few years, civil disobedience of varying scale and form has erupted across Morocco as a way of resisting hogra, such as the ongoing protests in the remote Amazigh village of Imider against the exploitation of the village's groundwater by a silver-mining company owned by the regime's oligopoly Societe Nationale d'Investissement (SNI), the coal mine protests in the northeastern border town of Jerada, and the demonstrations sparked by water shortages in the desert town of Zagora.

Another manifestation of these spontaneous acts of resistance has been the unprecedented economic boycott of Morocco's dairy, mineral water and fuel-distribution oligopolies that have close ties to the regime. The boycott has largely been launched on social media platforms and has been successful in raising awareness of the transgressions of Moroccan oligarchs.

These organic acts of protest have unmasked the failure of the regime's strategy of appearing above the political fray, while at the same time managing the political system and opposition forces. The monarchy's constant manipulation of the political party scene and civil society has removed the buffer between the royal institution and the people and has exposed the palace to direct public scrutiny.

Its increasing inability to constructively deal with social unrest has forced it to resort to the use of old oppressive methods of control. For his spontaneous act of dissent, Zefzafi, for instance, was sentenced to a draconian 20 years in jail - a punishment reminiscent of what Serfaty and other leftist activists faced in 1970s Morocco. But while Serfaty's sentence was the result of his opposition to Morocco's annexation of Western Sahara in 1975, Zefzafi and other youth protesters are imprisoned today for demanding jobs, economic development and an end to sociopolitical marginalization. The profiles of Morocco's activists today may be significantly different from the ones active in the oppressive "years of lead", but they currently face the same repressive methods of the Makhzen as their predecessors did. And, while in the past these methods were relatively effective, they increasingly appear to be failing to placate the simmering anger of ordinary Moroccans.

Posted by Mohamed Daadaoui at 8:47 AM