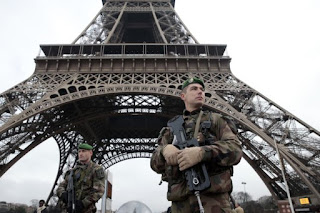 As Paris regained its freedom from Nazi Germany in 1944, a defiant Charles De Gaulle uttered his famous: “Paris, Paris outragé! Paris brisé! Paris martyrisé! mais Paris libéré!” –(Paris outraged, Paris Broken, Paris martyred, but Paris freed). Alas today, Paris, Beirut, Tunis, Sousse, Syria, Iraq, stand broken and violated by the scourge of the radical apocalyptic cult of ISIS. The sense of freedom is becoming ever so elusive for some, and all but a memory for others, especially as ISIS attacks over the past 48 hours have effectively signaled a fundamental change in strategy from guerilla warfare mainly in Syria and Iraq, “lone wolf” attacks by ISIS-inspired terrorists, to small cell organized terrorist attacks on soft targets.

ISIS has struck at the heart of Paris, Beirut, and Baghdad. Together with the downed Russian jet in the Sinai, ISIS has launched a bloody campaign of terror, and a war of attrition against the world. The massacres at the French capital come ten months after the Paris Hebdo attacks and are bloodier in their human toll. In what can be dubbed as France’s 9/11, more than 129 people have been killed, and hundred others injured in multiple coordinated attacks. The scale and scope of the attacks in Paris show a great deal of operational sophistication, and training with a great capacity to evade state surveillance in a country already under a heightened state of alert.

In their communiqué, ISIS claimed the attacks against “crusader France” and pledged more acts of terrorism against other western powers. Many have opined about the organization’s strategy and goals, and their cult of death that perpetrates act after act of barbarism against Muslim and non-Muslims alike. ISIS’s own publications provide a glimpse into the nefarious ideology. In a widely circulated manifesto, ISIS advances a stark Manichean view of the world divided into two diametrically opposed camps: “camp of Islam” exemplified by their extremist doomsday worldview, and a “camp of kufr”, epitomized by the western world writ large. Using fossilized selective readings of Islamic scripture, ISIS takes aim at what they call the “grayzone” of existence between the two camps, between Islam, Muslims and the West. Faced with this perverted uncompromising view and ISIS shift in strategy, world powers must also adapt their approach to the Middle East and in their respective countries.

ISIS shift towards complex, small-cell terrorist attacks against soft targets necessitates intensive police work, border security, and a comprehensive counter-terrorism strategy. It also requires extensive outreach to local Muslim communities where such radicalism takes place. A thorough examination of the causes of why ISIS has managed to turn local youth into terrorists in sizeable numbers is warranted. This is not legitimizing terrorism, but an analytical examination into the sources of socio-economic alienation that Muslim Europeans feel is responsible for the ease of radicalization in the suburbs, prisons, and neighborhoods all over Europe.

In the Middle East, a strategy to defeat ISIS would require a comprehensive solution to the maelstrom in Syria that would bring Russia, the US, and regional powers, Iran and Saudi Arabia to cooperate on a common military strategy. The current sheepish non-interventionist US strategy in Syria has not borne tangible results. While ISIS is feeling the pressure of Russian and US limited operations, those measures could be much more effective if coordinated around local proxy forces already fighting ISIS. Local paramilitary groups like the Peshmerga must benefit from greater logistical and military support, especially in light of recent successes against ISIS in Sinjar. Furthermore, a new coordinated military strategy has to strike at the heart of ISIS oil trade, which continues unabated in eastern Syria and western Iraq with a reported 30000 to 40000 bpd. In addition to military options, the world financial powers must stem the flow of money that have long sustained terror cells all over the world. There remains significant financial support for terrorism and terrorist causes from donors in the Gulf. Money trails must be investigated, jettisoned, and prosecuted.

ISIS presents a formidable challenge for Muslims to wrestle their religion from the claws of a reprehensible cult of death that speaks in the name of Islam. Beyond statements of condemnation and false analogies, Muslims have to engage in an auto-critique of the particular texts that promote such acts of bloodshed on a large scale beyond the perfunctory statements linking Islam to peace and humanism. New avenues for Ijtihad into novel readings of the sacred texts, even questioning the sources of jurisprudence that have been accepted without logical reasoning in contradiction to the higher humanistic goals of the religion, and contemporaneous realities. This would present a discursive alternative to the extremist Islamist views that are frankly condoned by a silent minority of Muslims. Indeed, what is needed is a new synthesis that deals explicitly with passages in the Quran and the Hadith on war, apostasy, and violence. This synthesis would constitute a counter narrative that rejects ISIS radical Manichean distinction between the camp of Islam and the camp of unbelief, and embraces diversity and interfaith dialogue across different faiths and traditions.

A counter-ISIS strategy also has to take into account the political and socio-economic factors behind radicalism in the Muslim world. The persistence of authoritarianism in most of the Muslim Arab countries provides little hope for Muslims to undertake a free and open discussion on the roots of violence in the religion. Discursive resistance against extremism inevitably requires pluralistic societies, not a bevy of dictatorial regimes that have coopted religion, and have censored any meaningful debates of Islam and politics.

As Europeans and the world tackle the atrocities of ISIS, the challenge will be to shun any discourse of collectivization that holds the majority of Muslims accountable for the sins of the minority radicals. The attacks should bring about more solidarity among all of those affected by terrorism in the West and the Muslim world. There are 1.6 billion Muslims around the world with diverse interpretations, rituals, and traditions. The Muslim way of life is under pressure and tremendous scrutiny, but it is high time we reclaimed the religion from those that hijacked it in the most heinous manner.

Posted by Mohamed Daadaoui at 6:33 PM

The challenge will certainly be to shun any discourse of collectivization that holds the majority of Muslims accountable for the sins of the minority radicals. It is essential to remember that even now Muslims are fighting ISIS as well. Morocco is the US's ally in the fight against ISIS and people in the West must remember that they have allies in the Muslim world and that together terrorism can be combated. Stories like these need to be shared more often! http://www.moroccoworldnews.com/2015/11/173143/cnn-says-morocco-helped-france-locate-paris-terrorists/

Mr. Daadaoui,
Your post highlights a lot of the ideal goals in challenging ISIS, but I want to hone into a few of them in their relation to Morocco and the rest of the Middle East/North Africa. To me, Morocco seems to be the regional epitome of a successful strategy against radicalism (well, as good as one can get anyways- see Casablanca bombings). The crown has implemented moderate reforms that still allow it to maintain its grip on power, while beginning to include its population into these discussions; It has instituted training programs for Imams, in order to combat radical preachers; The PJD represents a moderate Islamist party, stealing the thunder of radical Islamists. Certainly, there are still the challenges of poverty in the slums, for example. Yet, on the whole, Morocco seems to be doing everything right.

However, Morocco is unique in its position and its Sufi direction. Are there many other states that are in a similar enough position to actually implement these types of policies- or would their people or leaders even want them? Iraq and Syria are basically in flames, Algeria is still recovering from its civil war, many of the Gulf states export this radicalism, Palestine has its own issues with Israel, Lebanon has the dual influences of westernization and Hezbollah, I don't know a ton about Jordan and how much it has liberalized over the years- but it certainly seems like there aren't many options.

Plus, imperialism or interventionism is often blamed for the mess- you list a lot of ways in which countries like Russia and the U.S. can help, but where are many of these people at in their mindsets- we'll take any help we can get, or these countries will make things even worse?

thanks for the articls, but also don't forget Alqaida and taliban and all the other mouvement they are created by the same people

A good look at the socio-economic causes of recruitment into terrorism can be seen in the movie "Horses of God." The movie follows the life of two Moroccan brothers and their transformation from playing soccer in the streets together to blowing up a restaurant in Casablanca (based on the 2003 bombing). While seriously disturbing at times, the movie paints a good picture of how disenfranchised youth can turn towards radical religious groups for support and a sense of community. Slowly they become brainwashed by the radical ideology and end up doing exactly as their leaders tell them. A good way to start combating terrorist recruitment would be to provide the youth with economic and educational opportunities so that there is more hope for their futures than joining radical religious groups.