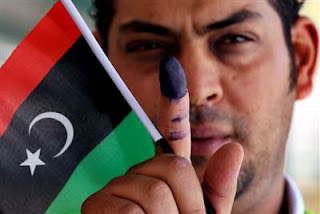 Libya may be on its way to buck the trend of Islamist electoral victory in post-Arab Spring. Reports suggest that the liberal, and secular-minded ex-PM Mahmoud Jibril may be leading  the elections of the National Congress. The 200-seat body will be a key transitional institution in the future of post-Gaddafi's Libya, as it will be entrusted with the task of choosing an interim government and a commission to draft a new constitution. The election commission will not report its preliminary results until Monday, but if the results hold, this will be a remarkable turn of events in post-Gaddafi Libya mired by occasional insecurity and warring armed tribal militias.

Despite initial unease, an estimated 60% of the 3 million registered Libyan voters woke up early, headed to the segregated polling stations and lined up in queues in the first such elections in the history of Libya. Despite reports of violence and burnt ballots in polling stations in Tobruq, Benghazi, Guba and Suluq, the elections went smoothly as jubilant and proud Libyans cast their vote for some of the 142 parties that have been registered.

My own sources in Libya reported a general jubilation on election day. Twittervese was buzzing with elated messages. Young Libyan, Malik L, captures this sense of joy as he states: "I'm happy w/environment we've experiencing over 48 hours. Just went through a war, guns everywhere & we had a peaceful day of voting." Libyans, rightly so, are proud of this monumental and historical achievement, and as their Tunisian and Egyptian neighbors to the east and west, sent a message to the world that electoral contests can take place in the Arab world without much irregularities or violence.

Mahmoud Jibril, who served as de facto prime minister in post-Gaddafi National Transitional Council, is now allegedly leading the poll results under his National Forces' Alliance.  He is a centrist liberal candidate, who once even served as economy minister in Gaddafi's government. Despite Jibril's statements of defection from the old regime, some Libyan are still wary of him. This makes the current reports all the more perplexing, and given the general conservative tendency of the Libyan society, where the Islamists of  el-Watan, led by Jihadi commander of the Tripoli militia Abdel Hakim Belhaj, were expected to hold a slight electoral advantage, especially since only 80 of the 200 seats are allocated on the basis of party lists. In that case, el Watan was perhaps slated to form a potential coalition with Muslim Brotherhood's Libyan offshoot, the Justice and Development party. The party is headed by moderate Islamist Muhammad Suwan, who languished for years in Gaddafi's prisons.

The National Salvation Front was also among the contenders in yesterday's elections. The front was one of the most steadfast and visible opponents to Gaddafi. Founded in the 1980s and forced into exile, the front was seen as the most consistent movement that has at all times kept its distance from Gaddafi's state. However, they have been unable to appeal to a substantial number of Libyans.

Whatever the final results are, this is a victory for Libya and Libyans amidst continuing anxiety about security, tribal rivalries, and some lack of respect for the law and legal procedures. Many Libyans are still armed, and some are even dangerous, as fighting and tensions occasionally flare up between tribes and clans. State control remains elusive in such cities as Zintan, Zwara, Sebha and Kufra.

The elections of the National Congress is a much needed step towards institutional and constitutional development of the country that was politically and economically depleted for 42 years. Libya faces arguably the toughest road of all the post-auhtoritarian states in North Africa. Whereas Tunisia and Egypt have varying levels of state institutions that can ease the two countries (albeit each with their idiosyncratic problems) through their transitions, Gaddafi has left a country with no state  apparatus and a deeply divided society along tribal and regional lines.

Libya's elections are just the beginning of the long process of state formation, but this will inevitably be a tedious task if Libyans are collectively not able to cast their tribal, clan and regional identity for the sake of a more inclusive and subsuming national identity.


Posted by Mohamed Daadaoui at 4:14 PM

Thanks for sharing the informative post.I wish you to post the new updates regularly.