*This article is originally written for and appeared in Muftah today. 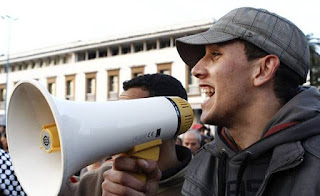 While Morocco continues to be hailed as a model for democratic reform and an exception to the Arab tempest of change, several indictors point to the fossilized and increasingly repressive behavior of the state. The Moroccan government has longed reveled in a myopic and contradictory strategy of institutional and constitutional manipulation. A recent article in the Washington Post exposes these flagrant contradictions in the form of regime promotion of the multi-million dollar music festival, “Mawazine,” starring the likes of Mariah Carey and Lenny Kravitz, versus its unjust imprisonment of Moroccan rapper Mouad Belghouat, aka “El 7aqed” (the indignant). El 7aqed was indicted and sentenced on May 11 to a year in jail on charges of contempt against public servants for his fiery anti-police song “Dogs of the State.”

Perhaps in a similar vain to the American rap group NWA in the 1990s, El 7aqed sought to express widely held indignation about police corruption in Morocco. Unlike the United States though, freedom of expression is severely limited in the kingdom and El 7aqed’s lyrics were deemed offensive to the state.

El 7aqed’s case is but one example of the state’s purposeful policy of promoting an environment of social activism and freedom of expression, buttressed by cosmetic constitutional reforms, while at the same time, undermining those same rights through summary indictments and unfair sentences.  This is a calculated strategy meant to show the limits of freedom of the press and expression, and to define the contours of tolerated speech.

This strategy was particularly evident in the case of Moroccan journalist, Rachid Nini, who was arrested and sentenced on charges of "offense against national and citizens' security." The vagueness of the charge thinly masks the true nature of the indictment against Nini, who was rounded up for his critical stances against the government and, at times, vociferous comments about immorality and venality in Moroccan politics.

Morocco's attempt to shed the relics of its past limitations on associational and informational freedom has long been beset by unease toward the press' increasing criticism of the state. However, if the country is to achieve genuine democratic reform, freedom of the press must be one of the main elements of current debate in Morocco. Reforms can only start at the altar of the press, which is a watchdog for the travails of state-society negotiations.

The Moroccan government cannot claim reform and change on one hand, while continuing to brutalize society on the other. Democracy does not work without the rule of law and individual freedoms. Both precepts have been  violated in the case of El 7aqed and Rachid Nini. The repression against theses individuals and their work has only refocused attention on the state’s shortcomings in managing an increasingly volatile social and political milieu rife with indignation and dissent.

Several people I have spoken to in Morocco maintain that the recent constitutional reforms, enacted in July 2011, are useless without the political will to implement them, especially those articles dealing with individual and group liberties and the rule of law. The last six months of Islamist-led government have seen slight, but largely inconsequential changes, and, even then, mostly in tone, rather than tenor. For instance, while the Islamist Minister of Justice, Mustapha ar-Ramid, pledged greater reforms and independence of the justice system, judicial progress has thus far been absent from politically motivated cases.

During a recent workshop I conducted for some 25 social activists in the Marrakech region, I was struck by the determination and enthusiasm evinced by young Moroccan activists. Committed in their desire for democratic reforms, they  all expressed frustration at the state’s lack of political will to partner and promote socio-political projects. For the Moroccan government, social activism is only an additional venue to exert its vast control. By drowning civil society with thousands of associations and organizations, the state has attempted to limit the lobbying potential of activists, and has inserted key pro-state associations that feign independence while tacitly promoting regime interests.

Morocco is dominated by a carefully-engineered political system, where every structure, institution, and organization plays a particular role in advancing “makhzen” power.[1] The regime has managed an increasingly fragmented political party scene and devised what political scientist Ellen Lust has termed a “divided structure of contestation” that allows selected political opponents to take part in the political system, while excluding others. These structures condition relations between the government and opposition groups, dictate the rules of the game within the formal political system, and help state agents infiltrate Moroccan political electoral contests and civil society organization to create new allies for the regime.

Civil society has been successful over the years in bringing about many policy changes in the areas of human rights, family law, and gender equality. The state has, however, been able to co-opt and set the boundaries for activism on such issues. Women's rights, human rights and democratic reforms are but a few examples of the state's attempt to redefine the main points of contention during electoral contests and within civil society. Furthermore, the state has sought to fully integrate these discourses in the apparatus of the state. For instance, institutionalization of women rights discourse has occurred through the creation of the blue ribbon Cell for the Integration of Women in Development (CIFD), which was entrusted with the task of reforming the Moudawana (family code).

The slight Islamist electoral victory last November, the cosmetic constitutional changes of July 2011, and the semblance of a vibrant civil society serve to legitimize the Moroccan system, but undermine democratic progress in a country that stand as an exception to the vast popular changes sweeping the Middle East and North Africa region. Until there are meaningful and thorough reforms to the core structure of Makhzenite power and its feudal control over the kingdom’s economic sectors, democratic progress will remain elusive in Morocco, a mere illusion touted in international forums as a model for other Arab states.


[1] Makhzen refers to the state apparatus made of the monarchy and the political elite in control of the state and economy in Morocco
Posted by Mohamed Daadaoui at 10:44 AM

By the way, Thank you for sharing with us, and we sincerely hope you will continue to update or post other articles.
cara mengobati penyakit bronkiektasis