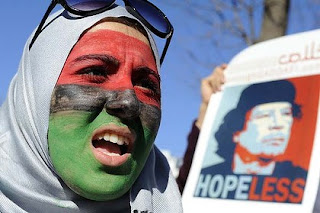 Mona El Tahawy’s latest article in Foreign Policy has provoked a firestorm of controversy in the blogosphere. Her provocative title “Why do they hate us?” evoked the much-loathed question posed by Bernard Lewis in the aftermath of the 9/11 attacks of why the Middle East hates America. Perhaps therein lies one of the many contentious issues with what is otherwise a well-written essay. The use of the word “Hate” is harsh and is devoid of any explanatory value. It is also emotional and not based on an objective assessment of the plight of women in the MENA region. However, El Tahawy’s use is obviously intended to shock its readership into pondering what is arguably one of the most abysmal records of women’s rights in the world.

Most of the response so far have centered on stylistic issues with the use of the word “fear” and the use of the naked images of body-painted niqab, which many argued evokes orientalist stereotypes of the Middle East. No one seems to dispute the litany of statistics that El Tahawy quotes in the article, which paint a rather depressing, but accurate picture of the status of women in MENA. Perhaps we are shocked because honestly very few of us knew, for example, that 90% of all ever-married Egyptian women underwent female genital mutilation, or that 80% of Egyptian women have been sexually harassed. This is in addition to the litany of reports on women’s status in the MENA that are frankly embarrassing and immoral.

When I read the article and saw the images of the naked woman body-painted in niqab, I was struck by the boldness of the tone and tenor of the article. Mona’s juxtaposition between the “us”--downtrodden oppressed women-- against “them” –the oppressive, misogynistic Arab Muslim men--bifurcates MENA societies in parallel segregated realms, where men in the different contexts that she enumerates consciously reject equality for women simply because they hate females. This is, in and of itself, a meaningless argument, because it tells us little about the micro dynamics of gender relations in the region. More importantly, El Tahawy should have looked at more in-depth socio-political reasons for such a plight. Many scholars have provided sound and research-based analysis of women’s status in the MENA. Of particular note are the excellent studies of Leila Ahmed’s Women and Gender in Islam , and Nikki Keddie’s  Women in the Middle East.

Having been on a panel with El Tahawy, I know that she is well-versed in feminist literature on the MENA and is not, as some suggested in their rejoinders, ill-informed. Mona El Tahawy is an opinion writer and as such, she has sought to provoke a debate about the issue of empowerment and the lack of socio-economic and political equal opportunities for women. The article could have been less harsh in its blanket indictment of all Middle Eastern Arab Muslim men, for that is hardly a fact and should not be taken by all as one. It is a heuristic device used by Mona to illustrate the misogynistic posture of Arab Muslim men. Misogyny after all results from contempt and tradition, but also from ignorance of one’s faith.

The issue of liberation of women does not solely hinge on the use of niqab or veil, which is fetishized in the images that accompanied the article in Foreign Policy (though one cannot be sure if El Tahawy chose the images or if that was an editorial decision). It is a policy issue that has to be targeted through active steps that involve state and civil society leaders. Liberation and freedom do not mean a rejection of women’s niqab as oppressive, since there are many women that wear it out of conviction. True liberation is to allow for choice, but not condemn the outcome of that choice if it is contrary to our own biased, skewed, often times western-tainted views of what women empowerment should look like.

I have to acknowledge that I am not a female, but I am Muslim and Arab, and have had a fair amount of interaction with women leaders, especially in Morocco, which El Tahawy singles out as lacking in true progress for women. It is difficult to argue against that position, for indeed Morocco has a long way to go in the areas of female empowerment and equality. The recent case of Amina Filali, who took her own life after being forced to marry her rapist due to an unjust loophole in the Moroccan penal code, is a testament to the distance that Morocco has still to cover to grant women their full human rights. Morocco, however, has one of the most vibrant and active women’s movements and organizations in the region. In the past decade, the work of organizations such as the Democratic Association of Women of Morocco (ADFM) and the Feminine Action Union (UAF) have been integral in bringing about laudable changes to the Mudwanna (family code). They have also articulated new discourses of women’s rights and adopted independent frameworks away from sterile party politics in Morocco.

Elsewhere women (veiled and unveiled) have been part of the nascent Middle East awakening: for instance, there are Brave women such as activist Lina Ben Mhenni in Tunisia, whose blog’s fiery rhetoric was instrumental in mobilizing Tunisian against the tyrannical regime of Ben ‘Ali; or Asmaa Mahfouz in Egypt, whose eloquent video on YouTube against the regime of Mubarak, calling on Egyptians to join Tahrir Square was key in fomenting the revolution in Egypt; or, the case of Tal Al-Molouhi in Syria, who stood tall against the repressive regime of al-Assad and was steadfast in her challenge to the regime until her arrest in February 2011; or, journalist and activist, Tawakkol Karman, better known as the “mother of the Revolution” in Yemen and winner of the Nobel Peace Prize in 2011, who organized student rallies and protests against the regime of Ali Abdallah Saleh.

Mona El Tahawy’s article will surely be subject to more and more controversy, and that is exactly her intention as an opinion journalist. She has succeeded in crafting a well-written essay, backed with impressive statistics. However, El Tahawy also revels in a broad narrative that conjures up long despised stereotypes about the status of women and gender relations in the Middle East. Her essay has been successful in inciting the intellectual furor of many in and outside the region. This is the sort of debate that we need to increasingly have, both as Arabs and as Muslims. However, these debates should not turn into personal attacks on the author, no matter how passionately we feel about the content and images in the Foreign Policy article.
Posted by Mohamed Daadaoui at 11:35 AM 5 comments: