The Feb. 20 Movement's Struggle for Relevance 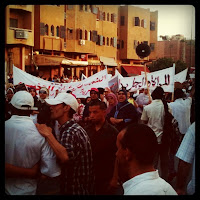 Finally back from a long sojourn in Morocco and Tunisia. My trip to Morocco coincided with the national debate on the constitutional revisions put forth by the palace commission's recommendations, and approved by an alarming 98% of voters. The high percentage of approval is indeed alarming because it signals a shocking return to the doctored percentages and egregious electoral transgressions of yesteryear. The years of Driss Basri, the former powerful Minister of the Interior. Several reports of fraud and lax voting procedures surfaced soon after the polls opened on July 1st. Though I didn't observe any in the voting station I visited.
The whopping 72% voter turnout is also an indicator of the state's successful campaign to alienate the "No" and boycott movements espoused by the Feb. 20 movement, and further dampened by the resounding royal endorsement of the new constitution. In a country with 44% illiteracy rate and where the king is semi-sacred, the vote for the constitution became a plebiscite on the monarchy itself. Any chances then for a popular rejection of the constitution was stillborn. Therein lied one of the many mistakes of the Feb. 20 movement: they have not adequately distinguished between their wholesale rejection of the proposed constitution and their specific position towards the monarchy in the constitutional draft. Their position on the role and status of the monarchy has been ambiguous and subject to several interpretations. The confusion made it easier for the state and its cronies to mount a counter campaign that cast the Feb. 20 movement against the monarchy and the territorial integrity of the country.
The mistakes of Feb. 20 movement were made all the more palpable by the apparent lack of organization and coherent strategy of protests which, at this point, are dwindling in strength and numbers. I was at the movement's post-referendum protests in Marrakech last Sunday, and the number of protesters didn't exceed 200 to 300 (see video I shot of the protests below). Most of the bystanders were gathered to deride and mock what a lot of Moroccans perceive today as an exercise in futility. That is the image the Feb. 20 movement has to shake off in the weeks to come. The results of the referendum have dealt the movement a major blow, maybe not a fatal one, but it has severely restricted its ability to mount a significant challenge to the corrupt undemocratic foundations of the state in Morocco.
The movement for reform in Morocco has to regroup and recast its message in more strategic ways focusing on what can be achieved in the short versus long terms in the kingdom. Any attempt or perceived attempt of reproach of the monarchical institution has to be carefully calibrated in order to reflect the duality in the modern Moroccan state between the Alaoui monarchical regime and the institutions of the government. The monarchy has been an institution above the political fray, of course with total control over the travails of the political scene. The Feb. 20 movement must at this point strive for cohesion and build the foundations for autonomous visionary leadership away from widely perceived "puppet" relationship with the left or the right in Morocco. If this movement is a reflection of the youth movements elsewhere in the Arab world, it has to distance itself from old aged political and civil society organizations. Most of all, it has to polish its image and message.
Posted by Mohamed Daadaoui at 9:55 AM No comments: