Ahead of Tomorrow's Constitutional Referendum 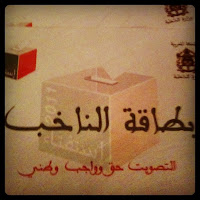 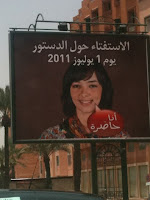 Back from Tunisia where I was a guest observer at the Board meeting of the Foundation of the Future (this will be subject to a future blog post). Tunisia's post revolutionary experience is under way with its ups and downs. The first day I was there, my friend went to the movie theater to watch Nadia el Fani's "Ni dieu, ni Maitre," (Neither God, nor Master) where she was assaulted by so called Salafis. Nevertheless, Tunisia has started a progressive movement towards change. However, my mind is with Morocco ahead of the constitutional referendum tomorrow. I have made my position clear in previous posts. This one includes a couple of pictures I took and a wishful thought the referendum was about meaningful reforms.
Posted by Mohamed Daadaoui at 12:02 PM 5 comments: 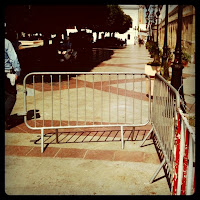 I am in Tunisia where the atmosphere is cautious but optimistic. This is a new reinvigorated society inspired by ideals of freedom, human rights and democratic governance. Gone are all of the cult personalistic and ubiquitous portraits and pictures of deposed dictator Ben 'Ali. Instead, walls and streets are adorned by revolutionary graffiti and names of martyrs killed in the street demonstrations against the ancien regime. Many Tunisians are cognizant of the historical moment they have initiated in the Arab world. As the spark that ignited the wave of the Arab spring, Tunisia could stand as a model for post-revolutionary peaceful transitional politics.
While many are apprehensive of this or that group, namely the Islamists, Tunisians I spoke to feel empowered. Tunisians in the souks, cafes, taxicabs and streets has left a positive impression of reserved jubilance. Many have welcomed me to the "new Tunisia," and the "Tunisia in revolution." visiting the Qasba and the Avenue Bourguiba were truly inspiring, but made me think of elsewhere in the Arab world, where protests have not resulted in regime change. As the Arab spring turns slowly into summer, Tunisia gears up for the elections for the constituent assembly originally set for July, but recently postponed until October 23rd. Tunisians and Egyptians fare a lot better than their counterparts in Syria, Yemen, Bahrain, and Morocco
Morocco, for instance, has a date with a constitutional referendum for which everyone knows the result. Especially after the state-orchestrated marches on Sunday and the ever present billboards calling for citizen participation on July 1st. There has also been no media space allowed for any movement calling for either a "no" vote or boycott of the referendum. Moroccan TV has purposefully alienated those opposition movements and engaged in mere propaganda for a "yes" vote. So on Friday, change will take place on paper and Morocco will have a new constitution, but it will not serve the cause of democratic change. In this sense, Morocco perfectly fits the old French adage: "plus ça change, plus ça reste le même."
Posted by Mohamed Daadaoui at 11:01 AM No comments:

An update: a few post ago, I commented on the case of columnist Rachid Nini accused of "offense against national and the security of citizens." Today, the journalist has been sentenced to one year in jail and a fine of 1,000 DHs (around US $128). This is another sad day for freedom of the press in Morocco and a further negative signal pointing to the state intentions to stifle any impulse for the liberty of expression.
Posted by Mohamed Daadaoui at 1:37 PM No comments: