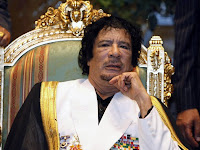 As the noose tightens on Gaddafi, the dictator has resorted to unparalleled levels of violence. With massive defections in the ranks of the civilian and military authority, Gaddafi's Jamahiriyya has all but crumbled around Tripoli. Still in charge from Bab al-'Aziziyya, the megalomaniac is as unpredictable as Nero or Caligula were. In his speech yesterday from the Green Square, Gaddafi called on his supporters to go out: "sing, dance and get ready." This is not a man who will go down without a fight. It is clear that his sons are also behind the arrogant and murderous defiance of the regime. In an interview with CNN Turk, Seif al-Islam Gaddafi pledged that the Gaddafi clan has three plans and each one of them involve living and dying in Libya. Seif has also dismissed any reports of thousands of causalities, and foreign mercenaries roaming the streets of Tripoli and neighboring cities randomly killing innocent Libyans.
It is only a matter of time before Gaddafi either flees the country or is dragged down from his feet by throngs of angry jubilant crowds. Especially as the UN Security Council unanimously voted to impose sanctions on Gaddafi, his sons and associates, and to refer the matter to a war crimes tribunal. However, in the absence of some form of foreign intervention, Gaddafi's demise won't happen without a massive tally of casualties. The international community has always been slow to respond to humanitarian crises. This should not go down as another Bosnia or Rwanda. Calls for humanitarian interventions, severe economic and military sanctions, and a no-fly zone over Libya are multiple. The last two options should garner consensus, but with every minute that passes, more innocent Libyans lose their lives at the hands of Gaddafi's mercenaries and murderous revolutionary committees. The US is working to master an international coalition against Libya, but their initial hesitance has been disastrous.
In the event of the likely demise of Gaddafi, Libya faces a monumental task of building the institutional foundations of a new state from an absolute scratch. At least Tunisia and Egypt has some existing institutions that with reform could engage in some form of democratic transition. In Libya, there is a complete institutional void. There is hardly any institutions, and where they exist, they are inchoate and partially formed. Libya does not have a constitution and all laws are promulgated through revolutionary committees and annual popular congresses. Gaddafi has veto power over all decisions, not as a president, but a leader of the revolution. However, this is slightly premature and should not deter from a complete focus on toppling a dictator who for 41 years, has squandered Libyan resources and violated his own people.
Posted by Mohamed Daadaoui at 3:42 PM

i´m wonderig how much the western systems have interest on his fall and on a change in such big and rich countries such as libya!

I am sure western countries stand to gain greatly from the fall of such an inconsistent and unpredictable leader. A possible gain would be to increase the production of Libyan oil above the daily 1.8 million barrels. Despite the initial reluctance to be involved, the US is looking at all options now, including possible military assistance to the opposition.