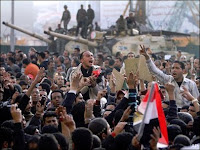 The Arab world is undergoing a remarkable winter uprising. Unlike, the social revolutions of yesteryear, which were framed in the context of radical ideologies against a socio-economic elite, the revolts in the Arab street lack a clear ideological foundation and are spontaneous uprisings against the excesses of the state, lack of good governance, rule of law and accountability. The common denominator between Tunisia, Egypt, Yemen, Algeria and Jordan is the inability of their regimes to promulgate real meaningful political and economic reforms. Politically, Arab authoritarian states feature the same menu of political manipulation featuring electoral engineering, limited space for opposition politics, and violations of individual civil liberties.
Economically, Arab autocrats in a bid to tighten control over the political system built an elaborate kleptocratic and clientelistic system that have siphoned off billions of dollars to the ruling elite and its state and social allies. It is not surprising then that the uprisings are largely led by disenchanted unemployed or under-employed youth. The IMF, for instance, estimates that Egypt needs approximately 10 million jobs, roughly 12% of its population. The numbers are even higher in countries such as Tunisia, Morocco, Jordan and Lebanon.
With protests scheduled in Syria (Feb.4-5), Algeria (Feb. 12) and Libya (Feb.17), Arab leaders are scrambling to engage in impromptu "reforms." King Abdullah of Jordan sacked the government for lack of economic and political progress, and Yemeni president Ali Abdullah Saleh announced he won't be seeking reelection amidst protests in Sana'a. These knee-jerk decisions won't probably make a difference to the Arab street. We've already seen clear determination with the Egyptians that anything short of the complete ouster of the Mubarak regime is unacceptable.
The octogenarian has been stalling amidst local and international calls for a regime change. One thing is sure, Mubarak has started a power transition after declaring he will step down in September and his appointment of Omar Suleiman, former head of the intelligence services, as his VP for the first time in 30 years. He has also unleashed his thugs in Tahrir Square to intimidate and crack down on the protesters. All are acts of a desperate man cognizant of the fact that his days are numbered at the helm of the largest Arab country.
In all likelihood, we won't see a true transition to democratic (good) governance in Egypt, as the military has simply no vested interest in giving up its socio-economic privileges. The events in Tahrir today speak volumes about the complicity of the military in keeping more of the same regime structure intact. As we speak, the military is calling on the protesters to go back home. This is radically different from the Tunisian case where the military and General Ammar made a decision to back the Tunisian street, since the army has traditionally been apolitical and on the margin of political institutions. The short term future in Egypt bears continuous strikes and social mobilization efforts to sustain the pressure on the regime.
Finally, the US needs to better prepare and position itself for an eventual change of the guards in the Middle East. Behind the scenes, the US ought to exercise more pressure on all Arab regimes to undergo real, not cosmetic political reforms. This is a momentous opportunity for the US to appeal to the Arab street after decades of disastrous foreign policy in the region. In public, the US has to stand by the Arab street and engage channels of communication with all forces of the opposition, including the Islamists.
Any real democratic change in the Middle East won't be complete without a full Islamist participation. Setting the Muslim Brotherhood in Egypt or An-Nahda in Tunisia as scarecrows is dishonest and showcases the US continuous failure to accurately appraise political Islam. Being the most organized political force in Egypt dictates that the Muslim Brotherhood might have a larger role in any potential post-Mubarak, but freer Egypt. Inclusion of democratic Islamists will make them stakeholders in the political system and showcases their diversity as nationalist, liberal, entrepreneurial movement, and yes with an Islamic reference seeking a better future for Egypt. The US and domestic forces in the Arab world need not indulge in this mainstream "Ikhwanophobia," for as long as Islamist groups and parties are willing to abide by legal norms, their participation in the future of the Arab Middle East should be encouraged.
Posted by Mohamed Daadaoui at 10:22 AM

Thanks you for this excellent piece. I run a news aggregator that is currently providing approximately 10,000 news stories per week on the Middle East. I think it would be a great idea if you RSS's your video feed we could send your channel out to a larger audience. See: http://www.newarabica.com/egypt/?cat=Egypt

I would like to that, but can you send me directions how to do that? Thank you!

Thanks for your analysis. I would add that one economic explanation of the Arab uprising is rent curse (Rents are easy money or unearned wealth that flows to governments with little effort or wise government policy). Many of the MENA countries having uprising receive rents from natural resource (Oil Reserve), geography (the Suez Canal) and Tourism (Pyramids). In situation Governments have few incentives to build strong political institutions or listen to their people or tax its citizen.