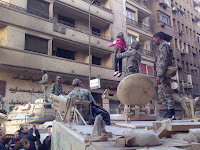 Several academics have drafted an open letter to President Obama urging him to stand behind the social protests in Egypt against the regime of Hosni Mubarak. The text of the letter can be found here and here.

As political scientists and historians who have studied the Middle East and U.S. foreign policy, we the undersigned believe you have a chance to move beyond rhetoric to support the democratic movement sweeping over Egypt. As citizens, we expect our president to uphold those values.

For thirty years, our government has spent billions of dollars to help build and sustain the system the Egyptian people are now trying to dismantle. Tens if not hundreds of thousands of demonstrators in Egypt and around the world have spoken. We believe their message is bold and clear: Mubarak should resign from office and allow Egyptians to establish a new government free of his and his family’s influence. It is also clear to us that if you seek, as you said Friday “political, social, and economic reforms that meet the aspirations of the Egyptian people,” your administration should publicly acknowledge those reforms will not be advanced by Mubarak or any of his adjutants.

There is another lesson from this crisis, a lesson not for the Egyptian government but for our own. In order for the United States to stand with the Egyptian people it must approach Egypt through a framework of shared values and hopes, not the prism of geostrategy. On Friday you rightly said that “suppressing ideas never succeeds in making them go away,” For that reason we urge your administration to seize this chance, turn away from the policies that brought us here, and embark on a new course toward peace, democracy and prosperity for the people of the Middle East. And we call on you to undertake a comprehensive review of US foreign policy on the major grievances voiced by the democratic opposition in Egypt and all other societies of the region.

Posted by Mohamed Daadaoui at 4:03 PM

Thank you for this informative blog! one of those rare blogs with high quality of information from the maghreb in english! keep on going, and let us up-dated!

Thank you for the compliment. I'll do my best.