Al-Qaeda's offshoot in the Maghreb has claimed responsibility for the December 19th kidnapping of two Italians in eastern Mauritania (see picture). Al-Qaeda in the Islamic Maghreb (AQIM) released an audiotape stating that the group has seized the couple in retaliation against what they called "crimes of the Italian government in Afghanistan and Iraq." AQIM has been active in recent months claiming several kidnappings mostly against foreign tourists and aid workers in the Sahel region. In addition to Eastern Mauritania, northern Mali has also been theater to AQIM's operations. In November, AQIM claimed the kidnapping of a French national, and Malian authorities believe that three Spanish aid workers that went missing in Mauritania are held in Mali by AQIM.
Over the past two years, AQIM has largely demanded ransom money in exchange for the hostages, and it is largely unclear what specific political demands the group has beyond the anti-US foreign policy brandishments in their public statements. The border between Mali and Mauritania are rife with lawlessness and corruption, which complicates the task of policing a largely nomadic territory. Some even advance possible government involvement in facilitating drug smuggling and explicit involvement in the kidnappings.
UPDATE 1/1/10: French daily Le Monde reports that AQIM has demanded a $7 million (4.8 million Euros) ransom in exchange for the three Spanish aid workers kidnapped in northern Mali. The demands came pursuant to intense efforts by Mali's president Amadou Toumani Toure, who has dispatched his consul in Saudi Arabia, and former Touareg rebel Iyad Ag Gali, north of Mali to the border region with Algeria where the hostages are believed to be held captive.
Posted by Mohamed Daadaoui at 11:04 AM No comments: 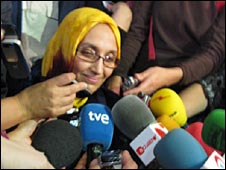 The saga comes to an end. Haidar's hunger strike is finally over after the Moroccan authorities reversed their expulsion orders of the Moroccan Sahrawi acitivist. It appears that Morocco bowed to a request (some see as a demand) from l'Elysee to re-issue a Moroccan passport to Haidar after a personal intervention from President Nicholas Sarkozy, and an implicit endorsement of Morocco's proposal of broader autonomy for the Western Sahara (said to have angred the POLISARIO). The reversal has been hailed by Haidar as a triumph of human rights and international law. Haidar returned to La'ayoune and was received by her family and friends like a hero, who managed to defeat the apparatus of the Moroccan state.
The blogosphere is jubilant about Haidar's return and sees in the break in the Lanzarote gridlock a major PR failure of the Palace, its foreign policy machine, and a monumental victory for Algeria and the POLISARIO. The stalemate definitely re-introduced the issue in its human form to the International scene, even in the U.S, where a certain neocon former foreign policy maker demonstrated in front of Morocco's Embassy in Washington D.C.
In addition to Sarkozy's statement welcoming the Moroccan autonomy proposal of the Western Sahara, a possible silver-lining for Morocco in this PR fiasco is the overwhelming consensus that the conflict garners in Kingdom. A cursory look at newspapers and Moroccan blogs reveals an incendiary support for the Moroccan position. Haidar's staged hunger strike and international pressure managed to galvanize Moroccans against what was seen as an Algerian-Spanish conspiracy to embarrass and to depict Morocco as a human rights' violator. The quagmire was equally embarrassing to Spain, in which territory the whole drama unfolded, but undoubtedly strained already tense Moroccan-Spanish relations. Spain appears to have offered no concessions to Morocco in regard to the Aminatou Haidar case at this point.
So what's next for Haidar now that she has become an international sensation, already dubbed as the "African Gandhi," a symbol of defiance for human rights? One can easily see her the focus of International human rights organizations seeking to cast more light on the never-ending conflict of the Sands. For Morocco's part, it will be interesting to see what kind of perspective they would cast on the whole debacle and their perceived public and international capitulation.
Posted by Mohamed Daadaoui at 9:25 PM 3 comments: 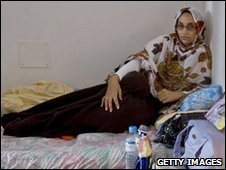 BBC reports that Haidar was taken to the hospital today in the Canary Islands, because she was suffering of "severe stomach and abdominal pain." This happens amidst reports that the whole stalemate is coming to a resolution as the Sahrwai activist may finally be on her way back to La'ayoune.  According to POLISARIO Ambassador to Algeria, Ibrahim Ghali: “Effectively everything has been resolved, according to our information…a plane is at Lanzarote airport awaiting instructions.”

Haidar has been on a hunger strike for the last month at Lazarote Airport in the Canary Islands, after she was refused entry to Morocco through La'ayoune. Moroccan authorities maintain that Haidar refused to acknowledge her Moroccan citizenship on the airport entry documents, thus renouncing her citizenship. Haidar's case has sparked intense media and international attention. European countries have continued their efforts to pressure Morocco into re-issuing Aminatou Haidar's passport. The Haidar quagmire in the Canary Islands also travelled across the pond, where in the US, Republican Senator James Inhofe of Oklahoma recently issued a statement calling for a swift resolution to Haidar's hunger strike. Human Rights Watch commended Libya for progress in its human rights record Saturday. The human rights organization cited "limited improvements" in the country in the areas of freedom of expression. The report states that progress was partially spurred through the efforts of the Gaddafi International Charity and Development Foundation. Back in October, Libya freed 88 Islamists, some accused of ties to al-Qaeda in a further indication of the country's new found focus on human rights. the Despite the slow pace of reform, journalists and political dissidents continue to be harassed by the state. Just Last Monday, Jamal al-Haggi, a former political prisoner, was arrested for his criticism of the government's detention of political prisoners.
Libya's efforts come at a time where the North African state is trying to move away from its international isolation and the label it had as a pariah state. In recent years, Libya's policies have signaled a move towards conciliatory foreign policy. Perhaps censing his own vulnerabilities, Qaddafi renounced all involvement in international terrorism and Libya’s ambitious WMD program. Libya has also abandoned old fantasies of Arab leadership, and has gradually emerged as an African leader as Qaddafi, “king of kings of Africa,” aided by his son and heir apparent Saif al-Islam, showed tremendous resilience in shaking off early erratic and bellicose image. Now More has to be done to charter a similar conciliatory domestic policy towards local political opposition and freedom of expression, to which the Jamahiriyya has only offered cosmetic changes.
Posted by Mohamed Daadaoui at 8:22 AM No comments:

Stalemate in the Canary Islands

Still on the continuing Moroccan-Spanish crisis surrounding the staged hunger strike of Sahrawi activist Aminatou Haidar. Latest news suggests that Aminatou continues to refuse a second medical examination to assess her health. Both Spain and Morocco are facing mounting pressure amidst several reports of Haidar's deteriorating health at Lanzarote Airport in the Canary Islands. The blogosphere is buzzing about the Haidar affair with several strongly condemning the Moroccan intransigence and Spanish alleged connivance with their southern neighbors, especially from pro-secession blogs.

It is clear that Morocco will continue to press its position amidst sheepish support from some in the EU and an overwhelming political and popular support, judging from comments on Moroccan press sites and blogs. However, if Haidar's health continues to worsen leading to her death, Morocco would find itself in a tight spot with Spain and the international community.

Haidar’s sit-in and hunger strike have already generated intense press coverage in Europe and the Maghreb. The Spanish Press has claimed that Morocco planned for the expulsion of Haidar even before she arrived in La'ayoune on November 13th. Thus, Haidar's alleged renunciation of her citizenship was just a pretext to get her expelled from Morocco.

The stalemate is embarrassing to Spain as well, since the events are unfolding within its territory sparking a fervent debate among the political elite in the kingdom. The socialist-led government of PM Zapatero is ardently looking for a swift resolution of the problem. Some in Spain have even called for tough diplomatic measures against Morocco, which at this point, is holding true to Mohammed VI's new tough dichotomous line of either you are "a patriot or a traitor" on the issue of the Western Sahara. Unfortunately for Aminatou Haidar, she is considered to be in the latter category as she has been labeled by Moroccan press, state and political elite as a conspirator against Morocco's territorial integrity.
Posted by Mohamed Daadaoui at 9:22 PM 1 comment:

The Saga of Aminatou Haidar Spain has formally requested that Morocco issues a passport for Sahrawi activist Aminatou Haidar, amidst worries about her health as she continues on a three-week long hunger strike at Lanzarote Airport in the Canary Islands. Aminatou Haidar renounced her Moroccan citizenship in al-'Ayoun airport last November, claiming that she was visiting the Western Sahara and not Morocco on a trip from the Canary Islands. In a publicity stunt, Haidar, accompanied by two Spanish journalists refused to fill out " Morocco" in her entry card at the airport, provoking her arrest and expulsion back to the Canary Islands. Spain and other European countries have exercised considerable pressure on Morocco to re-issue a passport for Haidar and allow her to go back to Morocco.
Moroccan authorities seem intransigent on the issue and claim that it will be difficult to grant Haidar her citizenship back, after she has allegedly renounced it. Earlier in November, Mohammed VI in a televised address on the occasion of the 34th anniversary of the Green March,  issued a stern warning to all Moroccans that doubt the "Moroccanity" of the Western Sahara, stating:

Let me clearly say there is no more room for ambiguity or deceit: either a person is Moroccan, or is not. There can be no more duplicity or evading of duties. Now is the time for clear, unambiguous stances, and for responsible conduct. One is either a patriot, or a traitor. There is no halfway house. One cannot enjoy the rights and privileges of citizenship, only to abuse them and conspire with the enemies of the homeland. 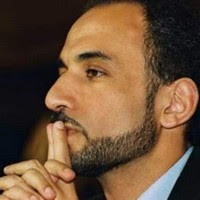 Not Maghrebi news per se, but this has been on mind lately, especially in light of the Swiss potential ban on mosque minarets. Reading this piece in the New York Review accentuated my utter puzzlement with this European malaise with Islam, taking on one of the most controversial Muslim European intellectuals, Tariq Ramadan.

The author reviews two books, one of which is Tariq Ramadan's latest What I Believe. Ramadan felt compelled to write such a short book in order to explain his views on Islam, which he has articulated over the past 25 years. The reviewer advances Caroline Fourest's book Brother Tariq: The Doublespeak of Tariq Ramadan as a reference for criticizing Ramadan. However, that book should hardly serve as a reference. In a recent show on French TV France 3, Ramadan debated Fourest on her charges in the book, in which he found more than 200 citation errors and misquotes. It is also odd that the fervor against Ramadan and the charges of "doublespeak" seem to center around his lineage to maternal grandfather Hassan al-Banna, founder of the Muslim Brotherhood and Islamist father Said Ramadan. Do we need him to abjure his family ties to remove that specter of fundamentalism?

Ramadan has always been clear in his argument for promoting Ijtihad (interpretive reasoning), and for a new reading of Quranic and Hadithic texts in areas of social and interpersonal affairs. His much publicized call for a moratorium, during a debate with Nicholas Sarkozy in 2003, on corporal punishment, stoning and death penalty was an indication of an Islamologist's serious attempt to force Muslims to adopt a pedagogical stance towards their scripture when it does not pertain to creed or the fundamental beliefs of the religion.
Posted by Mohamed Daadaoui at 9:53 AM 4 comments: