As it was expected, Zine al-'Abidine Ben 'Ali won a fifth presidential term in today's elections in Tunisia. According to early results released by the Ministry of the Interior, Ben 'Ali won in a landslide receiving 89.62% of the votes. The newly re-elected president's support didn't dip below 84% in most of the 26 regions of Tunisia. In two of the regions, Ben 'Ali won 99% of the vote. Ben 'Ali came to power in 1987 after former president and independence leader Habib Bourguiba was declared unfit to rule. In the last two decades, Ben 'Ali set the country on an impressive economic trajectory, while maintaining an authoritarian political rule dominated by his Democratic Constitutional Rally party RCD.
Posted by Mohamed Daadaoui at 11:33 PM No comments:

Some more articles on Tunisia's upcoming elections and the crackdown on the opposition and the press. The LA Times lists some of these egregious breaches of individual and group liberties on the eve of the presidential and legislative elections. For instance, leftist candidate of the Ettajdid Movement, and probably most serious rival of Ben Ali, Ahmed Ibrahim saw his manifesto seized by the  Tunisian authorities. The Independent's Adrian Hamilton has a similar piece on the stifling of the freedom of expression and ability of the opposition to contest freely and fairly. Hamilton provides a scathing portrait of "a soft dictatorship" in which "political control is more discrete and more legalistic."
Posted by Mohamed Daadaoui at 3:38 PM No comments:

Portal on the Tunisian Elections

Maghrebia has a useful portal on the upcoming October 25th elections in Tunisia. The page features short synopses on the four candidates for the presidency: Ahmed Ibrahim of the Ettajdid movement, Ahmed Innoubli of the Unionist Democratic Union (UDU), Mohamed Bouchiha of the Popular Unity Party (PUP), and the favorite and current president Zine el-'Abidine ben 'Ali of the party in power Constitutional Democratic Party (RCD). Fora biased state coverage of the elections, see the official Tunisian Press Agency's online page devoted to campaign for the incumbent president Ben 'Ali.
Posted by Mohamed Daadaoui at 9:52 PM No comments: An interesting article in the Arab Reform Bulletin on the upcoming October 25th presidential and legislative elections in Tunisia. It is expected the current president Zine al-'Abidine Ben Ali will win a sixth presidential term, while his ruling Constitutional Democratic Rally (RCD) will win the majority of seats in the Chamber of Deputies. In case of his all probable re-reelection, the 73 year-old Ben Ali will be ineligible to run for re-election again as the Tunisian constitution sets the maximum age for presidency at 75 years. But we have seen this episode elsewhere in the Arab authoritarian system. One can definitely see a constitutional amendment to raise the age requirement beyond 75 years to accommodate Ben Ali's possible future bids for the presidency.
Posted by Mohamed Daadaoui at 12:20 PM No comments:

Women and Politics in Morocco 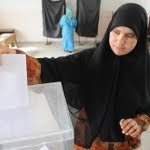 As women continue their struggle for gender equality, various social and economic problems beset their full integration in Moroccan society. Last June, some 3400 women candidates won seats to local city councils around Morocco and the first female mayor of a major city in the history of Morocco was elected in the city of Marrakech. however, million of others continue to be politically alienated and economically dependent. The recent edition of the Arab Reform Bulletin has an interesting short piece on the plight of women in the kingdom and the state's apparent attempt to co-opt them at least politically at the moment, in order to offset their vast marginalization on the social and economic fronts.
Posted by Mohamed Daadaoui at 11:50 PM No comments:

As it was expected, the Prosecutor's office in Paris has decided to suspend the arrest warrants against the four Moroccans sought in the disappearance of Mehdi Ben Barka citing more information was requested from Interpol. The warrants were issued for the arrest of, among others, General Hosni Benslimane, head of the Royal Gendarmerie (pictured above). Some Moroccan pundits argue that France's push behind the issuance of the warrants and their swift suspension is an attempt to flex French political muscles over its sphere of influence, that for France, also comprises the francophone and former protectorate Morocco. Moroccan Arabic Daily al-Massae reports that according to a high level anonymous French source, the whole episode sought to "shake" Moroccans and Morocco's political system by opening up old wounds as a punishment for the recent Moroccan decision to purchase U.S. F16 fighter jets over French "Rafale."
Posted by Mohamed Daadaoui at 7:38 PM No comments:

Interpol has issued international arrest warrants in the case of the 1965 disappearance of Moroccan leftist activist and opposition leader Mehdi ben Barka. The warrants are for four Moroccans allegedly involved in the kidnapping and disappearance of Ben Barka in Paris. Among the four wanted are General Hosni Benslimane, head of the Royal Gendarmerie and powerful military man in the kingdom; General Abdelhaq al-Qadiri, former head of Morocco's internal intelligence services, and former intelligence officers Miloud Tounzi, aka Larbi Chtouki, and Abdelhaq 'Ash'ashi. The case of Ben Barka has captivated the Moroccan political psyche for the past forty years, and it is highly unlikely that the warrants will be served at all. However, these warrants are seen as an indictment of the former regime of Hassan II and its possible involvement in the disappearance of the opposition and non-aligned movement leader. Mehdi ben Barka was a leading figure behind the emergence of the Union National des Forces Populaires (UNFP), which broke away from the Istiqlal party in 1959. Ben Barka, along with Fquih Basri, establsihed the New Left movement, which among other things, sought to overthrow the monarchical regime and to establish a socialist-leaning republic.
Posted by Mohamed Daadaoui at 12:14 PM No comments:

Another Attack on the Press in Morocco

Over the last couple of days, Morocco has been the scene of yet another state investigation into the press. This time, Akhbar al-Yawm has been closed until further notice and is target to prosecution after it published a caricature depicting the newly married Prince Moulay Ismael on a wedding platform ('amariya), and a partially complete Star of David on the Moroccan flag in the background. The palace has already denounced the cartoon and its attempt to "politicize a family ceremony." The editor of the daily Akhbar al-Yawm Taoufiq Boua'chrine and caricaturist Khaled Kedar are under investigation for "insulting the national flag."
Posted by Mohamed Daadaoui at 1:42 PM No comments: